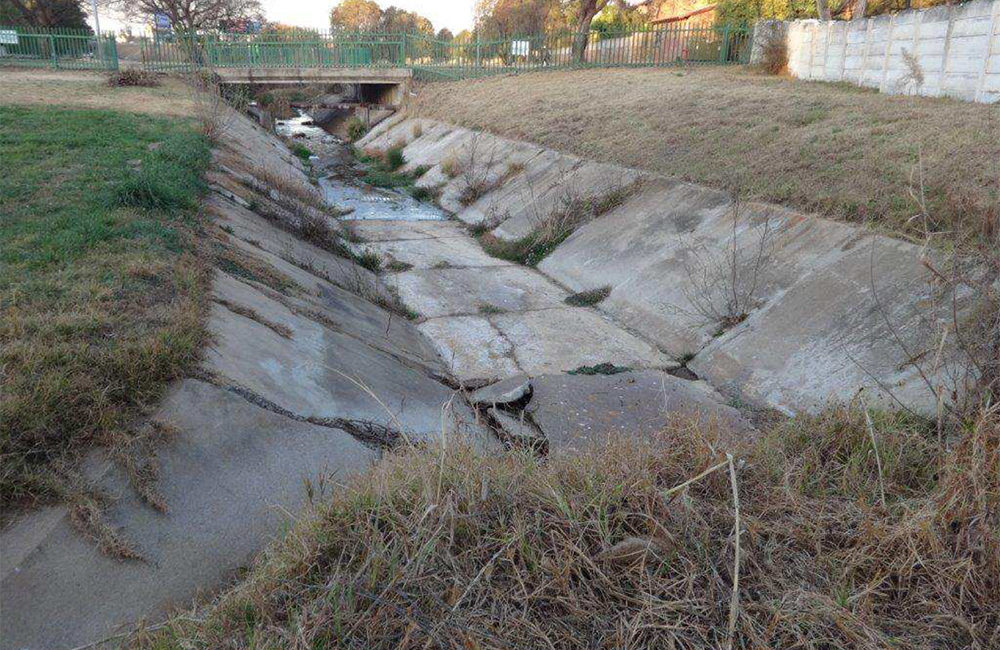 Investigation of a distressed concrete canal lining in Hymany park

This report was drawn up for Randpark Ridge Village Association (RRVA) – a Section 18A Public Benefit Organisation run on behalf of the residents of Randpark Ridge Ext. 16.

Mr. Phil Culham, Chairman of the RRVA requested that Roderick Rankine inspect the condition of a distressed concrete channel lining to the stream running through Hymany Park adjacent to Randpark Drive in Randpark Ridge Ext 16, evaluate the risks of failure of this structure and to recommend remedial measures to mitigate further damage and save the structure. 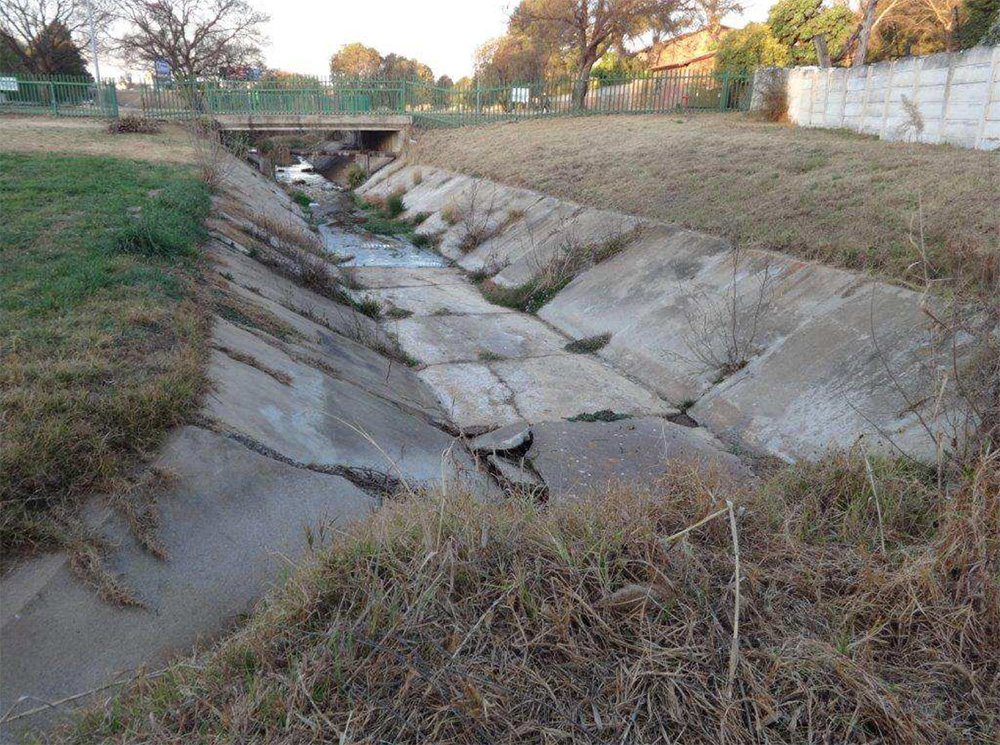 The location map shown in Figure 2 shows the position of this concrete channel lining in the stream coming from Hymany Dam (a tributary of the Klein Jukskei). This stream runs in an easterly direction under the N1 Highway and joins Pampoen Spruit in Sharonlea which eventually becomes the Klein Jukskei. 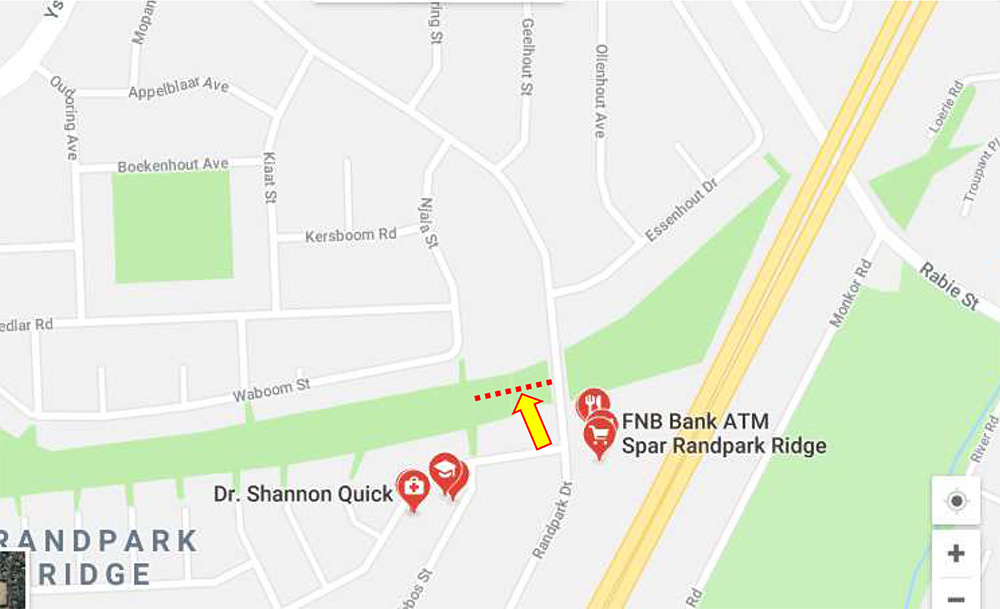 The writer visited the site on 23 August 2018, in the presence of Mr Culham and again on 15 November 2018. No documents had been supplied at the time of writing this report.

This lining comprised cast in-situ unreinforced concrete slabs approximately 75 mm thick – one slab cast horizontally on the stream bed and two inclined slabs cast on either embankment at a slope of approximately 45degrees. 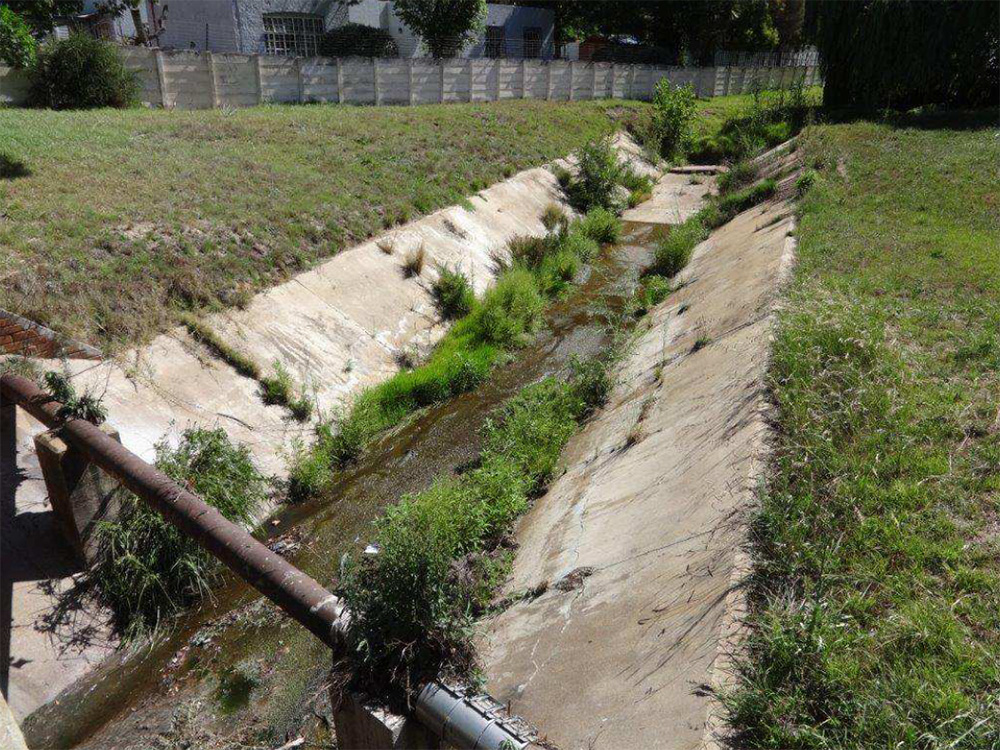 Fig 3. Concrete channel lining viewed from the Randpark Drive Bridge looking west. Note the vegetation growing out of the construction joints and note the appearance of water only after the westernmost five panels on the far side of the image – prior to that point where the water wells up, it flows freely under the structure (called a piping failure). The vulnerable and severely corroded steel sewer pipe can be seen in the foreground crossing the stream.

Fig 4. Two views of the cracked and displaced floor panel on the westernmost side. Note the
deep void under the slab (now totally unfounded) as well as how the stream has bypassed the
channel lining and is now flowing beneath the concrete. 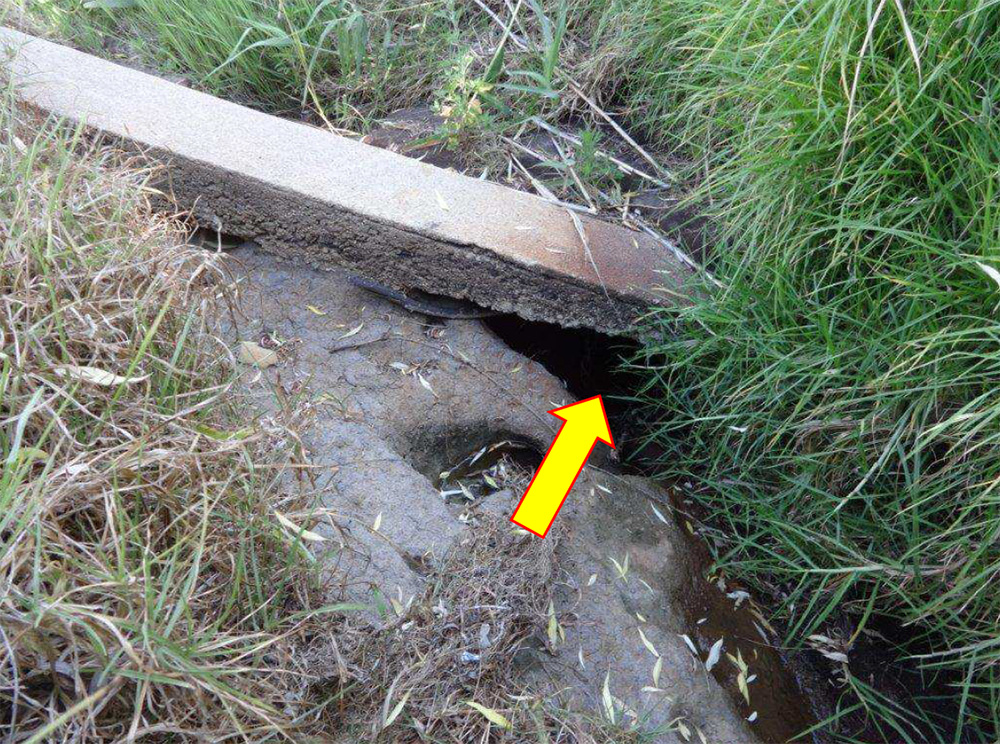 Fig 6. Scour cavity upstream, and underneath, the leading edge of the concrete channel lining.
Note the complete absence of any upstream cut-off wall to combat scour undermining the lining.

This concrete channel lining is in a critical state. The broken concrete panel on the west end is liable to be lifted and washed downstream by a typical Highveld thunderstorm. Once this happens, a chain reaction may be initiated whereby adjacent panels are undermined and similarly displaced. If a large panel gets lodged under the bridge aperture, it could obstruct/block the flow of water passing under the bridge or possibly divert the stream flow to one embankment where the erosion could inflict severe structural damage. There is also a strong likelihood that such obstruction might destroy the steel sewer pipe adjacent to the bridge (which is in a very poor state of disrepair).

*Resist the temptation to inject polyurethane expansive foam filling supplied by specialists such as Uretek. This foam has very low density and is likely to become buoyant in waterlogged soil. This would greatly increase the risk of uplift of the concrete lining during a flood event – particularly if the voids filled below the lining are large. 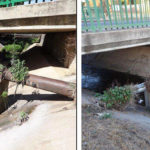